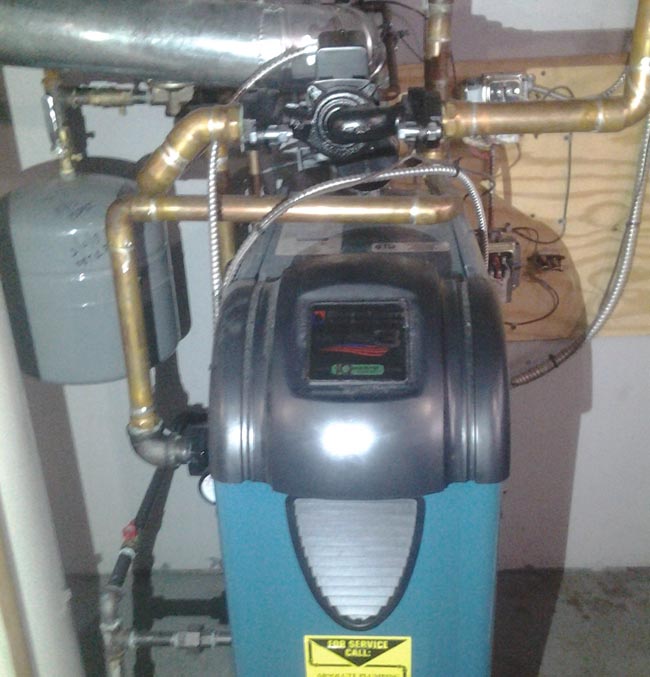 Many of Avon homes have hot water boiler heat. They usually heat your home quietly all winter, so you hardly know the boiler is running, but with time hot-water boilers can start making a rumbling, pinging and knocking sound when the burner is running. When the boiler is making noises it is known as “kettling” . This noise may become loud while the boiler is heating but stops soon after the burner turns off.

Depending on the system, a hot-water heating boiler is supposed to operate around 180 degrees Fahrenheit. In areas with hard water, lime scale deposits can form on the heating surfaces of the boiler. This can be the cause of boiler making noises. As water is heated in the boiler, the calcium salts dissolved in the water form lime scale on the inside of the boiler’s heat exchanger. The mineral deposits increases the temperature needed for heat to transfer, and the surface of the lime scale causes hot spots higher than the water’s boiling point, which create air bubbles in the boiler water. As the bubbles rise into cooler water, they collapse noisily. The formation and collapse of the air bubbles can be a leading cause of the boiler making noises.

If your boiler is making noises contact a licensed hydronics technician. Once the technician has removed any trapped air and eliminated burners, thermostat, pumps and other mechanical causes for the boiler making noises, they may try a descaling of the boiler. This involves shutting down the system and allowing it to cool. The next step is adding descaling chemical called Hydro-Solve 9100, restarting the boiler and allowing the chemical to work for several days. The last step is to flush the boiler to remove the dissolved scale, then refill the boiler with fresh water.

“Excellent service. Arrived when they said they would. Took care of the problem quickly. Dan was very knowledgeable as to what was my problem and what was the problem of the village. This saved me a lot of money. We were very happy with Dan’s service.”

“I was very pleased with Dan’s work. He fixed my hot water tank within 1/2 hour. I would highly recommend him to anyone needing plumbing work done. I will definitely contact Absolute Plumbing for replacement of my tank in the very near future. Thank you Dan!”

“Dan is extremely knowledgeable and diligent. He made sure I understood what was wrong with my plumbing and laid out scenarios to run through in order to fix it. I’d recommend Absolute Plumbing & Boiler for all your plumbing and boiler service needs.”

“Dan responded promptly to our call about a leaking water heater and scheduled a quick appointment. He was extremely professional, explained every detail in layperson terms, and provided a cost-effective solution. We would recommend Dan to anyone and think he should teach classes on customer service to other contractors.”

“We are very pleased with the work that Dan did for us. He is very knowledgeable, very professional, and very helpful. We felt that Dan was very honest in his assessment of our situation and very fair in his price to correct our problem. We would hire Absolute Plumbing again if we’re ever in need of a plumbing service, and would highly recommend him to my family and friends.”

“Our water heater went out Sunday night and Dan came Monday and got it back working. Thank-You so much for the quick service. Was Really nice to take a hot shower Monday night. You guys ROCK!”